You are not anemic, at least not anemic from “iron deficiency!”

I am gradually assembling the research that is making it patently obvious that this ubiquitous declaration that many members are terrorized with their iron status is an absolute case of mistaken identity.

Your low ferritin is not a sign of anemia of iron deficiency. What you most likely have is what is deemed as anemia of chronic inflammation (and it is also called “anemia of chronic disease, however, for the sake of this thread, it will be the former)

So this is what I learned this morning while waking up to my daily cup of Joe and reading this short but very important article by Fiorelli et al, 2007 (link noted below):

There a lot of information to take in, but it is scientific gold, as it lays out the rationale and the reality of this highly prevalent condition of “deficiency” that many, folks are afflicted with. I would like you to understand, this condition of ACI is caused by a lack of bioavailable copper, that has profound impacts on downstream metabolic events involving iron, as we have explored and discussed on numerous occasions.

Furthermore, Fiorelli added even greater value by referencing the definitive study in NEJM no less, that explains how all of this ACI chaos happens. I would encourage you to take a moment and read this important article by Weiss & Goodnough, 2005.

It may be one of the most important articles referenced in this series of posts on Iron Toxicity.

Fig. 1 below comes from this key study by Weiss & Goodnough. 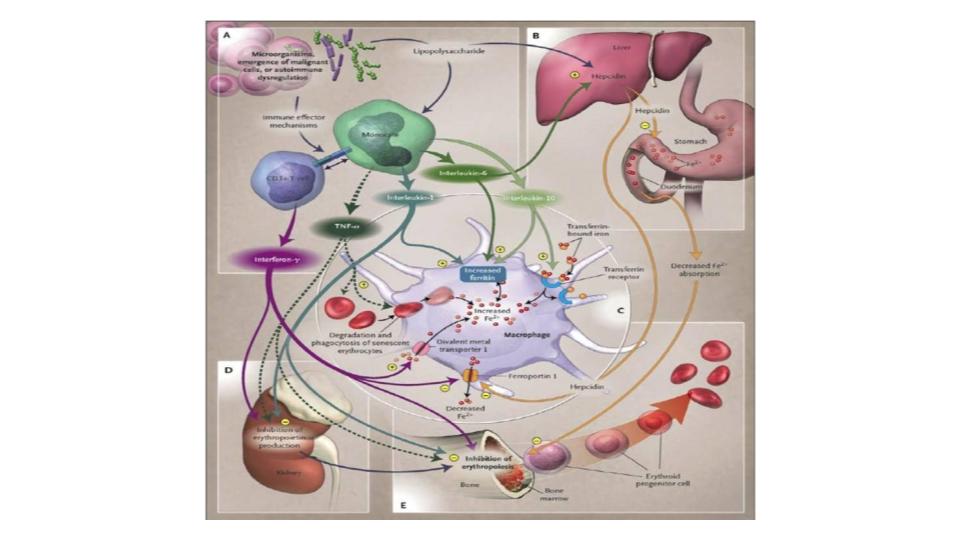 So here’s my question: Do you honestly believe that the outrageous complexity that is implied in this picture is accurately or completely captured by the simple, and single misleading blood marker called ferritin?

I would go so far as to suggest that anyone being informed by their favorite practitioner that they are “anemic!” should be required to read this 2005 article from NEJM.  Then get them to explain how the intracellular protein, ferritin, covers all of those bases and sites of metabolic action. While keeping in mind that our iron-hero, Sir Douglas B. Kell, PhD, world-renowned expert on ferritin, not only thinks, but also has documented that ferritin is found inside the cell, and that the serum level of ferritin (outside of cell) should be zero!

It turns out that this dynamic between iron and the inflammatory process is really important and has been the subject of much research. For those that want to really dig in, please explore the compelling research and writings of Marianne Wessling-Ressnick:

Has your doctor has brought this known fact about how iron feeds pathogens to your attention?

Continuing down this rabbit hole of iron truth are the compelling articles by Nancy Andrews, MD, PhD. She seems to have a knack for simplifying what, at times, can be a most daunting topic. I simply love her diagram of the process of iron recycling, presented as Figure 2, which highlights the dynamic and fluid aspects of iron metabolism. 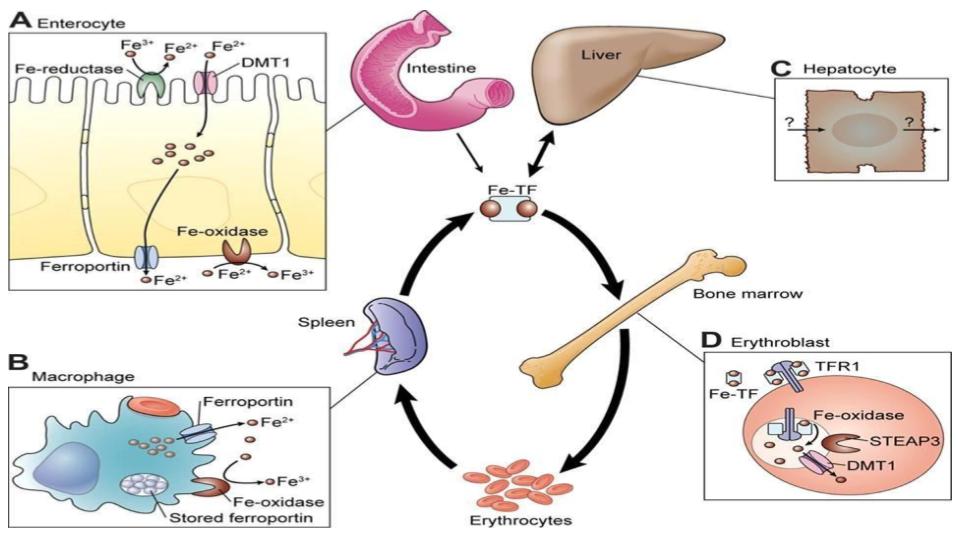 See how iron is meant to be in constant circulation?  The process of iron inside the human body is an elegant square dance where movement and motion are mandatory.

Why are we using an intracellular iron-storage protein, i.e. ferritin, to assess the complexity, importance and elegance of copper<>iron metabolism? Ferritin is not supposed to be in the serum in the first place!

Please enjoy the short BIO on Nancy C. Andrews, MD, PhD, now Dean of Duke University School of Medicine and she is one of the greats of the field of hematology:

An even better, crisper and shorter article by Dr Andrews is one where she draws the known link between the inflammatory cytokines and their notable impact on the expression of hepcidin that then affects the retention of iron inside the macrophage.

What I especially love about this article is the very simple, but profound diagram of:

This is depicted at Figure 3 below.

An important question for those who are still taking iron supplements, yet are experiencing no change in their iron status: Has your doctor explained how iron supplements cause inflammation that then triggers the actions depicted in this diagram?

Here is the link to Dr Andrews’ insights about this cytokine<>hepcidin dynamic:

For those that are never satisfied with enough, here are some bonus reads that will shed important light on these iron dynamics, particularly as it relates to the dampening effect that inflammation has on the accessibility of iron in the human body:

Now let’s get down to some brass tacks, did you know that brass is made of copper? What’s really going on here? Where is copper/Cp in all of these diagrams? I thought ceruloplasmin, especially via its ferroxidase function, was critical to these iron issues?

Patience, grasshopper, you are absolutely right! I was just about to point that out!

We have discussed this several times before, but the ultra-gifted Italian researcher, Giovanni Musci, has clearly demonstrated how ceruloplasmin is essential for the proper functioning of ferroportin to allow proper and natural iron release from cells, and macrophages, in particular.

This is pointed out in Figure 4 below, please pay particular attention to diagrams A, and note in diagram D how hepcidin presence kills the iron-egress function of ferroportin and also disempowers the supporting role of ceruloplasmin in these critical dynamics to move iron out of the cell. 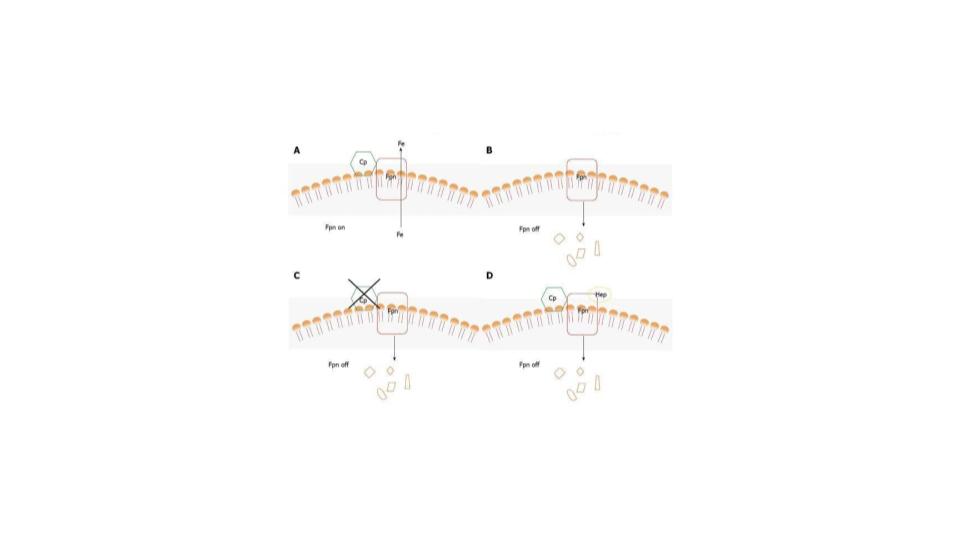 That is the gift of the ferroxidase function of ceruloplasmin as it ensures proper iron mobilization and circulation in the body. If you haven’t already done so, please enjoy reading this seminal study by Dr Musci:

To me, Figure 3 absolutely sums it up. The only word missing in that simple diagram is the word; iron. It is, indeed, the pivotal agent to cause inflammation.

So, what to do? Here are some suggestions.

We are engaged in a wholesale “rewiring” of the mind and our understanding of what factors are genuinely important to assess our copper<>iron metabolism.

These two critical metals that shape the function of the liver are joined at the hip of ferroxidase enzyme function of ceruloplasmin. It is vitally important that you internalize that and be sure to teach that to your doctor or health practitioner that you might be working with.

I truly hope you find this latest treatise on copper<>iron dynamics helpful and healthful!

Have a blessed weekend!