There is 5 times more iron in breast cancer cells than normal cells.

I’m confident that many will not like what this post has to say. Quite frankly, even I was stunned by the compelling cancer research that I stumbled upon (was guided to) earlier this week.

Before you settle into this hard-hitting post, I would like you to witness the combined impact of hydrogen peroxide (H2O2), ascorbic acid and iron sulphate. This brief video was brought to my attention by Ben Edwards, MD, and my gifted clinician, “step-down-transformer,” which had received it from one of his gifted ND practitioner buddies.

Please be sure to be sitting down when you watch it, it makes quite the statement!
www.youtube.com/watch?v=-V27uNpGR6c

I’m confident that those who are regulars on MAG FB Group get it, and that you are totally on-board! The video, however, is a compelling example of the iron dynamics that we are seeking to better understand and bring under better control inside our bodies. Know that this is a reaction that can take place inside our cells.

What may surprise you is that even with all that I’ve shared and written about, that even I have a smidgeon of doubt – from time-to-time — that this iron thing is the sole metabolic issue, and that this RCP thing is the sole anti-dote to that iron-induced chaos. After internalizing the research this week, I have absolutely no doubt! My resolve is now locked in.

During my morning research ritual earlier this week, I happened upon a recently released textbook (2014) entitled:

Victor Preedy is a distinguished professor of nutritional biochemistry at King’s College in London, England. I’ve read other articles and research by Dr Preedy, but none on cancer. (And as my typical ritual, I called to thank him for this amazing body of knowledge).

The material that I’m sharing in this post is from Chapter 13 entitled Iron, Oxidative stress and Cancer. Within that chapter, Iron Homeostasis & Cancer Development: Mechanistic Views” which is co-authored by two gifted Korean iron researchers: Mi-Kyung Sung, PhD, and Yun-Jung Bae, PhD. Here are the key findings that captured my attention:

“A proteomic analysis of TGF-B1 (Transforming Growth Factor-Beta1)-induced epithelial-mesenchymal transition (EMT) in murine hepatocytes indicates that FHC (Ferritin-Heavy Chain) is one of the significantly altered proteins [34]. FHC possesses a Ferroxidase function to a controllable iron pool, suggesting that available free iron may be an important factor to induce EMT and cancer cell migration [emphasis added].”

It is key to understanding this dynamic to know that TGF-Beta1, which is activated by iron, down-regulates [i.e. turns off] ferritin heavy chain enzyme function. That is a major big deal!

The obvious question: How might this present in the serum measurement of ferritin?

Now, please stop reading this post, and study the attached table 1 below that outlines the amount of iron vs. other metals found in breast tissue – tumor cells vs. normal cells. 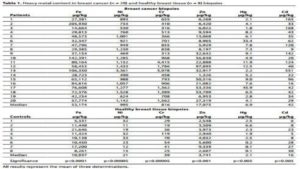 Do you honestly think that this iron concentration within cancer cells only occurs in breast tissue? Given that breast cancer is a known form of estrogenic cancer, we can certainly conclude that this iron presence is a safe bet for all estrogenic cancers. It certainly seems to seal the deal for the iron <> estrogen connection that is found in those with low bioavailable copper.

What I will add, however, is that the research on the connection between iron-induced metabolic chaos and cancer is growing daily. Please take command of this ironic and obvious environmental and epigenetic metabolic factor that is at the core of cancer metabolism.

The century old awareness that Scientists & Clinicians have had about the Fenton Reaction (discovered in 1894) between ferrous (Fe2+) iron and H2O2, it is important to begin to understand the profound impact that this hydrogen peroxide oxidant has in our bodies and in our metabolism.

What I want to now point out is the central role that H2O2 plays in three key areas highlighted in the research above and noted with asterisks:

Please know, I am beginning to compile a BROAD and DEEP set of facts re. iron <> inflammation <> H2O2 interaction that has pervasive metabolic dysfunctions, which is enough to bogle the mind.

In addition to the above, it is worth noting that iron-induced H2O2 production was the very agent for lipid peroxidation in our arteries and aorta in the 1950’s and beyond. Which was never revealed while the nation and the world was taken hostage by low fat and cholesterol-free diets that were forced upon us by Ancel Keys, PhD, lo these 60+ years ago.

Cholesterol by itself was never the problem. It was the fact that in the presence of iron and thus H2O2, which increased cholesterol being produced in our iron-laden/copper-deficient livers, gets rusty. It is called coronary arterial plaque, but it is rust, nonetheless!

The one aspect of this cancer information that might be worth considering is that treating cancerous tumors with ascorbic acid, while increasingly favored and worthwhile as it overwhelms the cancer cells with oxidative stress, it hardly seems enough or complete given the obvious need to address the prevalence of iron.

It is clear and compelling that we also want to be engaging in a full-scale chelation of iron with Desferoxamine or related chelating agents when in the throes of seeking to resolve these cancerous conditions. It would seem that there is more than adequate justification for this two-pronged approach to assist practitioners in resolving cancer metabolism within their patients’ bodies.

So, there you have it.

The numbers are in, and the evidence is incontrovertible!  Table 1, above, is watershed evidence that there is way more to this cancer dynamic than we were ever told. I think it is high time that we ask better questions and seek better options than we’ve been given in the past. It is also high time that we come to accept the central and causative role that iron plays in metabolic dysfunction and mineral dysregulation.

I’ll leave it at that, and wish you the best as each of you pondered the implications of this research.