Attached to this post is from a penetrating study on the metabolic origin of brain aging and Alzheimer’s.

Atamna, H., et al. (2002). “Heme deficiency may be a factor in the mitochondrial and neuronal decay of aging”
www.ncbi.nlm.nih.gov/pmc/articles/PMC137500/pdf/pq2302014807.pdf?fbclid=IwAR30u0XbRCdgGmUT8lbwGbko1v1f44K8WqXlrxp7yhuEnZXGNmXlWXjrhwI

Trust me when I say this, Alzheimer’s disease (AD) is no disease!

Given that this neurological condition is ravaging society and our bank accounts around the globe, I would strongly encourage you to study this carefully.

The bottom line, this condition stems from Heme deficiency that is the result of dysfunction in one enzyme called ferrochelatase. It contains what are called iron-sulfur clusters, but what is missing in this otherwise scintillating study is the fact that ferrochelatase is dependent on bioavailable copper, aka ceruloplasmin. 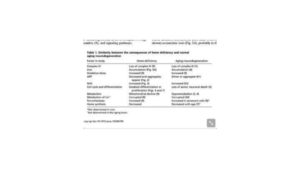 Furthermore, note that iron deficiency does not mean a lack of iron, but actually means a shortage of functional iron!  And we all now know that it’s copper that enables iron to work properly hence known as copper<>iron metabolism. This means it is a ventriloquist act and iron is the dummy.

What is especially important to understand is that when heme does not get made properly, there are a series of downstream metabolic impacts, not the least of which is iron accumulation in the brain. Lack of functional iron creates a metabolic requirement to store Iron.

Share this research with your loved ones, friends and their favorite practitioners who may be oblivious about this critical mineral dimension. This is due to misleading and lacking clinical training.