Iron Toxicity Post #47: The truth about the cause of mitochondrial dysfunction (as least as I see it)

This post is about the truth of the cause of Mitochondrial Dysfunction, at least as I see it.

Over the years, there have been certain phrases that have chaffed me, among the most offensive is this term: “Mitochondrial Dysfunction.”

It is a term that conjures up an equal amount of fear, wonderment and confusion like that often used phrase; “Oh, you have a lesion”

There are thousands and thousands of articles, both for the layperson and the scientist, written about this mitochondrial condition that is rapidly becoming a pandemic on this planet.

When all the dust settles, it’s not unlike writing a Magnus Opus about how to drive a car, with meticulous detail to every facet of that automotive experience with the notable exclusion of two key and fundamental dimensions to a successful drive:

Please take a good long look at the picture below. 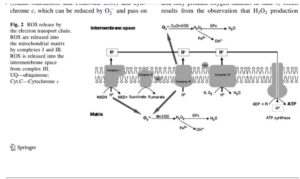 I’ve been looking for this type of picture that dumbs down the mitochondrial electron transport chain (ETC) so that I can actually understand it!  What I love that this diagram helps to fill in many blanks that are ubiquitous and cleverly disguised in so much of the scientific literature.

The mitochondria are where our adenosine tri-phosphate (ATP) gets made.  ATP is the packet of energy that fuel our cellular, tissue, organ and bodily functions.

This takes place at Complex IV of the ETC. It’s ridiculously important. The mitochondrial cytochrome proteins that make up these complexes are the most extensively studied electron-transfer proteins.

The step that should make you sit up and take special notice is called cytochrome c oxidase (Complex IV) because it is here that four electrons get transferred to oxygen so that water (H2O) can be made so the ATP molecule can be re-made from ADP. As it turns out that these cytochromes are actually heme proteins, which means that they contain ferrous (Fe2+) iron, which is the most reactive form of iron. This critical cytochrome c oxidase enzyme does not work without bioavailable copper, which is the key to make the ATP- engine work.

Who do you think is supplying the copper energy for this critical aspect of our metabolism? Ceruloplasmin! For those seeking mineral insight into this metabolic dynamic, please read Broderius, 2010:

It is common to think that only copper and zinc superoxide dismutase (Cu/Zn-SOD) or known as SOD I, works the intracellular space (i.e. outside the mitochondria) and that only manganese superoxide dismutase (Mn-SOD) or known as SOD II, works the intra-mitochondrial membrane (i.e. inside the mitochondria). I used to think that was the case, too, until I found this ancient blockbuster (pdf.) article on ceruloplasmin (Goldstein, 1979):

What’s notable about the ceruloplasmin ferroxidase enzyme is that it is a recognized scavenger of superoxide radicals. They are those reactive oxygen (*O2-) molecules that are quite destructive. As you can see from the diagram above, they can and do devolve both inside and outside the mitochondria. They turn into the most destructive molecule in the body hydroxyl radical (OH-). This is the origin that what dings deoxyribonucleic acid (DNA) to create epigenetic chaos to support methylenetetrahydrofolate reductase (MTHFR).

This destructive molecule also leads to a breakdown in the efficiency and impact of the energy production of these mitochondria, which is known as chronic fatigue syndrome (CFS) as well a host of other chronic conditions of low energy.

You can now see how this destructive molecule also disrupts the cellular machinery of our body systems such as livers, hearts, brains, kidneys, joints, and muscles.

Furthermore, what I was not certain about until today is that ceruloplasmin is not just restricted to the cytoplasm (i.e. outside the mitochondria). It turns out that this scavenger is, for a fact, found inside the mitochondria, as well. It is well documented in these Russian researches!

I have learned over the years to regard the abstracts that have no abstracts as being really important.

The plot begins to thicken with the benefit of these penetrating insights and here’s what I think is the blockbuster.

It turns out that 20% of the mitochondrial bi-lipid membrane is made up of a phospholipid called cardiolipin. While it is 20% of the total composition, it is actually 50% of the phospholipids found to be a part of the ETC (i.e. Complexes I – V) lipids. Here is the article that offers keen insight to the dynamics between cardiolipin and superoxide:

It turns out that cardiolipin is essential for the function of cytochrome c oxidase. Wow! I have read scores of articles on this Complex IV enzyme, cytochrome c oxidase, but I have never read that before. Their interaction is electrostatic in nature, as I’m sure everything is that happens in our bodies.

So what does this mean?

What do the professionals from Dover have to say in the summary about the origin of mitochondrial dysfunction:

So in the absence or the presence of lowered production of ceruloplasmin, those ubiquitous superoxide (*O2-) molecules get furthered radicalized by ferrous (Fe2+) iron. Then into the OH- radical that then oxidizes the cardiolipin.

I happen to think it is relevant and most vital that ceruloplasmin brings both the copper (key) and ensures that the cardiolipin (fuel) does not get rusty as we talked about the car analogy earlier in the post.

Ceruloplasmin, as the Ferroxidase enzyme, converts ferrous (Fe2+) iron into ferric (3+) iron, the latter form of iron being what can then be used in cellular transport and other metabolic proteins to keep us healthy and energized. Isn’t it amazing that ceruloplasmin does this and more?

Even though this term mitochondrial dysfunction seems hopeless and it is a critical issue we all recognize and know. It can be whittled down to size and made far easier to comprehend and understand the why and how, and then we can prevent or reverse its development in our metabolism.

It is not a Medical Disease. Mitochondrial dysfunction is simply a clinical sign of Mineral Dysregulation – pure and simple.

Those who are seeking direction on what to do to address this, you can go here and get started: therootcauseprotocol.com