The post is about the ironic deceit of hormone D (Vitamin D).

“In a time of universal deceit, telling the truth is a revolutionary act”
— Attributed to George Orwell

It’s been a full year of posts on iron. I would never have imagined that I would become so enamored with this arresting topic to such an obsessive extent.

I am hoping this post will be the most memorable, as it synthesizes my many posts and articles on hormone-D.  It fully integrates it with the issue of iron toxicity. Telescoping to the forthcoming punch line:

For those that are a bit squeamish, this would be a good time to take an extra tug on your seat belt!

In my sincere opinion, being labeled “Vitamin D deficient” is analytical laziness and clinical irresponsibility. That’s a bold statement, but it’s one based on extensive research, that much I can assure you.

The important question is why is the person low in 25(OH) D, which is also known as storage D.

These three studies provide compelling information about why a person is low in storage D: 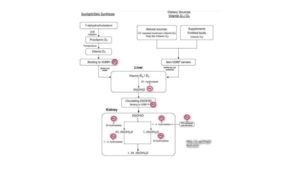 It’s what is laid out and implied in Fig. 1 above from the Deng, 2013 research. (Note all the red circles with magnesium!)

The next most important question to ask is why is the magnesium low in the Liver, in the first place?

I had originally completely overlooked this truth for the longest time up to this week.

It turns out that what I, and most who study on this topic, had successfully bypassed is, the fundamental fact that cholecalciferol (pro-Vitamin D3) is transformed in the liver by a key enzyme called hepatic 25-hydroxylase that we know is magnesium dependent.

It is then subsequently transformed in the kidney by another key enzyme, renal 1a-Hydroxylase that is also magnesium dependent. We know all that.

What hit me like a ton of bricks was the realization that there is a reason why the liver doesn’t work right, and why it doesn’t allow proper function of that first key enzyme to work?

Anyone want to venture a guess as to why?

It is none other than our rusty friend; excess, unbound iron being the proverbial “wrench in the works”.

Chow, et al (1985) clearly state in their stunner of an article:

“Under normal conditions, plasma 25(OH) D is formed in the liver from vitamin-D [cholecalciferol] absorbed from the diet or synthesized in the skin under the influence of ultraviolet light [8].”

Emphasis on the word normal! They go on to point out that

“This suggests that iron may have had a direct effect on serum 25(OH) D levels.” 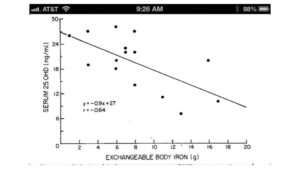 What is particularly poignant is the Fig. 1 that is from Chow et al, 1985; note the inverse correlation, as the iron level rises, the level of storage-D [25(OH) D] drops.

For those that think that this was a one-and-done study by Chow, et al; I happened upon an even more recent study by Ezzat, et al, 2015: (noted previously at the start of this post)

Now we have to discount this study as it’s not from the USA but it hails from our brethren far to the north.  This study is a stunner, largely because it draws the same conclusion i.e. iron’s impact on storage-D levels (25 (OH) D) and has a notable set of Figures, as well.

The most notable is the noted inverse relationship between a key liver enzyme, AST (sensitive to iron status), and level of Storage-D as noted in Fig. 3b: 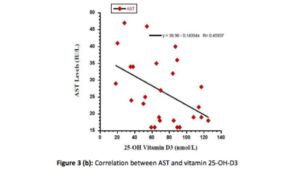 Once again, the conclusion is inescapable; it is the iron getting in the way of the critical conversion of cholecalciferol in the liver.

Then it dawned on me, I knew why there is and has been such a rush to pump us up with synthetic hormone-D, that should have been naturally occurring in our liver, but could not. Not only that we lacked the magnesium; it is also that somewhere within the body system that we simply have too much iron in our livers to allow this essential metabolic conversion to take place.

Then I came across this research by Mangin, et al, 2014 takes on an even greater importance:

The connection between excess, unbound iron and the state of inflammation is absurdly high. The relationship between elevated ferritin, and inflammation is well documented. The connection between low magnesium and initiation of the entire inflammatory cascade, which I have repeatedly shared via the pioneering & penetrating research of Weglicki & Phillips of GWU Medial Center, 1992a, b, c & d.
https://www.researchgate.net/scientific-contributions/39152975_W_B_Weglicki

So suddenly, we have a new model to work with,
low storage-D (25(OH) D) levels are showing a billboard for both:

“Too much iron and too little magnesium in the liver that together cause inflammation.”

Wow, that’s a stunner. It gives greater credence to the increasingly recognized condition of “Anemia of Chronic Inflammation”.

What is this research about iron <> vitamin-D is seeking to tell us?

To bring this treatise to a noteworthy close, it is well known that James A. Holick, PhD, MD is the clinician that discovered that calcifediol (storage D – 25(OH) D) is the predominate form of Vitamin-D (hormone D) in the body, that calcitriol (active D – 1,25-(OH2) D) is the active form of vitamin D (hormone D).

Holick was also the one that discovered that hepatic 25-hydroxylase is the very enzyme (noted earlier) that converts cholecalciferol >> calcifediol in the liver. He is the man when it comes to knowing all there is to know about hormone-D.
https://www.bumc.bu.edu/busm/profile/michael-holick/

But what I find fascinating is that not one reference can be found with his name and either of these key minerals of magnesium, or iron. Call me an odd duck, but I am deeply troubled by that scientific gap in his research, esp. when so many are being drowned, worldwide, by this synthetic, toxic form of vitamin-D, also known as “19-nor” in the research literature. I’ve no idea what that “19-nor” is referring to, but I fully intend to find out.

So, there you have it. We’ve compiled quite the year’s worth of new information by putting the spotlight on the dynamics of copper<>iron dysregulation and the related impact these two minerals then have on our magnesium status, in particular, as well as our physiology, overall. I plan to do an overview post on Hormone-D in the New Year, that I’m confident many of you will find both illuminating and reassuring.

Have a blessed New Year’s celebration later this week, and let’s look forward to new mineral insights and understandings in 2017!