In my continuing efforts to “take off the gloves,” about how they are being poisoned by iron fortification, iron supplementation, iron infusions, iron stimulation, iron mesmerisation, etc. Today’s post will present some new dimensions to this iron discussion that will hopefully “stimulate your little grey cells”, as the great fictional and enigmatic detective, Hercule Poirot, so frequently said while solving equally perplexing, yet elusive, murder mysteries.

One of my clients suggested that I might find this blog on curcumin and iron useful:
margaret.healthblogs.org/life-with-myeloma/discovery-of-curcumin/curcumin-and-iron/

In fact, it’s quite good, it’s well written, but it is quite misleading.  Nevertheless, this blog rocked my world, and I am grateful to Margaret for that!

I’ve read a couple hundred articles on iron, iron metabolism and iron dysregulation. I also read my fair share of articles on ferritin, and yes, I knew that ferritin came two forms: an active state (heavy-ferritin with ferroxidase function) and an inactive state (light-ferritin without this enzyme function). I hadn’t shared that bombshell as of yet, but did any of you know that ferritin had two forms? Have you ever had your favourite practitioner tell you this distinct difference when they talk to you about ferritin?

I really wonder now, are we low in the active or the inactive state of ferritin?

But what this Blogger, Margaret, wrote that really caught my eye is the fact that ferritin has a relationship to both iron and oxygen!

Oxygen? How, exactly, did I miss that functional factoid? Given that ferroxidase has a special relationship with oxygen, wouldn’t it be best to have the heavy (active) ferritin form?  I wonder how many practitioners have any clue about that unique characteristic of ferritin, beyond the fact that there are two forms? Furthermore, how many have any awareness of the importance of ferroxidase function for the active-ferritin form?

Quite frankly, I truly believe our practitioners have got it all wrong.

It turns out that iron is actually a Janus – it wears two faces across numerous dimensions. Here are some critical and dualistic facts about iron:

I am hoping you knew all of those dualities and furthermore, I am sure that your doctor has explained these complexities of these minerals as implied in these numerous states of duality?

Now you can understand how I feel about iron anemia vs. iron dysregulation and practitioners’ use of high and low to describe our iron status is very misleading!

The worlds of medicine, nutrition and mineral metabolism are littered with this “High” vs. “Low” mentality. It is criminal, and it is the very origin of how we’ve gotten so confused about iron and have become so iron toxic!

There is no such thing as iron metabolism.

For a fact, it is copper<>iron metabolism, the leading researchers know this, and point out that these two metals are joined at the hip of ceruloplasmin (Cp). This Cu<>Fe metabolism is actually a Ventriloquist Act, which means iron is the dummy. Practitioners simply want to add more dummies to an “act” that lacks proper functionality!

It is not all about how much iron; it’s all about how usable is it. We are learning that ferritin can be most unusable especially when ferritin is in the Light-ferritin form.

I have come to reflect on it, ferritin is the ultimate Trojan horse, especially in a body that lacks ferroxidase function in its ceruloplasmin, as well as in its ferritin.

We all know that horses are most useful when they are functional? Well, this is true of iron, and ferritin, too!

The inactive “Trojan ferritin” being fed more iron is simply adding insult to your non-functional iron pool, especially if your mag RBC and serum ceruloplasmin are both anemic.

So, if you are still have a mind to think that you’re “anemic”, even after all this post. Please take this little test to assess your indications of iron knowledge.

If you say yes to any of the above questions, then you are still following iron anemia rather than iron/copper metabolism.

What I am noting in more and more iron research articles, are increasing references to the term “Iron deficiency” being openly referred to as the “lack of functional iron”. Not an absolute “deficiency of iron!” Big difference!

Copper<>Iron metabolism is all about making the iron functional. That is only possible with the presence and prevalence of copper and copper-driven enzymes like ceruloplasmin (Cp). Also the copper dependent anti-oxidant enzymes (SOD, CAT, & GPx) designed to neutralize the iron-driven reactive oxygen species (ROS) that unbound iron creates with no limits within our bodies, our tissues, and our cells.

If your practitioner(s) are still not questioning your true iron status and are still not focusing on your magnesium and ceruloplasmin status. Then treating you with calcium, hormone-D, zinc and iron. And worst of all, are still “attacking” your alleged “copper toxicity,” then they are wasting both your time and your health, with all due respect.

This duality of iron is very poorly understood! The systemic simplistic solution of adding more iron to your iron dysfunction is both one-sided and dangerous.

Here is a great way to start the process of better understanding your iron status, as well as supporting its recovery and rebalance within your body:
therootcauseprotocol.com/about/ 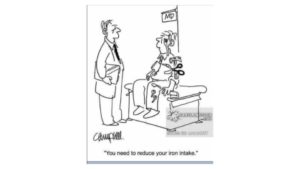