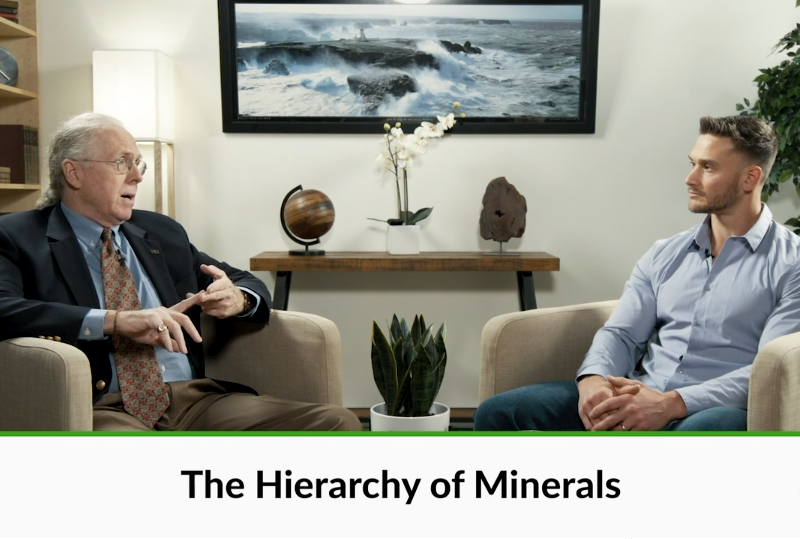 The full, hour long video interview can be viewed in it’s entirety by:

– [Thomas] So every single day, millions of people are plagued with fatigue. But a lot of times we end up thinking that it’s just our lack of sleep, or maybe it’s just not enough caffeine, or maybe it’s just the blood sugar crash from the potatoes that we ate at breakfast. But the reality is, there’s a lot more going on than just what meets the eye when it comes down to fatigue. In fact, I’ve got a wonderful guest here with me, Mr. Morley Robbins, who is gonna explain why it’s something different from what you might think. It’s actually more along the lines of minerals, and one mineral in particular, that you might think is a good mineral. That’s one that’s known as iron. Thank you very much for being here.

– [Morley] Well, thank you, Thomas. What I’ve come to realize is that there is a hierarchy to minerals, that they’re not all equal. There are 84 minerals in seawater. There are 18 essential minerals in our body. But I really think that there are three that stand out in terms of their supremacy to influence how well we work. And I think our conversation today is gonna focus on the need for more magnesium, the need for more bioavailable copper, and the need for less iron, in our diet and in our bodies.

– [Thomas] That’s intriguing because we are so often told that we need to be getting more iron. It’s probably every day I hear from, particularly women, that are told that they’re anemic. They are told that they need to be eating more spinach, and need to be consuming more iron. In large amounts, too. And I’ll be totally honest with you. Up until a couple of years ago, I was a believer in that too. It made logical sense, but when you actually start looking at all of the science, it doesn’t really make a whole lot of sense. So getting right to the chase, I’d love for you to be able to explain to everyone, really, truly, what is happening with this excess iron, and why we have an excess of iron. Because we’re actually getting enough iron, aren’t we?

– [Morley] This goes back into the 1920s, was when they first started really studying are we getting enough iron in our diet. It goes back to the early research about pregnant women, and the fact that during the course of a pregnancy, a woman’s hemoglobin actually declines as the pregnancy progresses. It’s a known fact. The technical term for it is called hemodilution, in that the mother is actually providing for another child, and there’s only so much hemoglobin to go around. It’s actually fascinating. And at any give time, 1% of society is pregnant, but they decided to inoculate the other 99%. That’s a valid premise to say, well, if they’re struggling with iron, aren’t we all struggling with iron? And you go into the annals of the League of Nations, which was the predecessor to the UN, and the World Health Organization, this issue of iron deficiency is so deep in the research, and so much a part of their awareness, that it’s just, well, of course that’s what the problem is. Well then you start to really dig and you find out it isn’t just iron deficiency, it’s retinol deficiency. Retinol is the animal-based form of vitamin A. The first article that I found about the connection between retinol and iron, and the development of hemoglobin, 1855. A physician, Theophilus Thompson, from London, who used cod liver oil to cure anemia, in London back in the 1850s. It’s fascinating. And a lot of that primal research has been lost. How many people want to go back to 1855, or would even trust that research? But the fact of the matter is, there’s a lot of misunderstanding about these minerals. And what happened, it’s actually fascinating. In 1934, three physicians from the United States won the Nobel Prize for curing anemia and pernicious anemia. Their names were Dr. Whipple, Dr. Minot, and Dr. Murphy. Three highly-recognized MDs in their respective institutions and they all used the exact same product to solve those problems. Do you want to guess what it was? It was beef liver. They got a Nobel Prize for using beef liver to cure anemia and pernicious anemia. And what most people don’t know, and you obviously do, which is exciting, is there’s a lot of copper of liver. But what there’s also a lot of is retinol. And it turns out that retinol is what really brings the energy to the whole process of making copper bioavailable.

– [Thomas] Got you. So, essentially, copper is, in essence, kind of the opposite of iron. And without copper we really can’t have that balance, and so really the issue is more so coming from not having enough of the vitamin A to make the copper available?

– [Morley] Yeah, make it bioavailable. Yeah. So let’s use an analogy. We love to go to restaurants. And what are there a lot of in a restaurant? There are a lot of waiters. And what are they doing? They’re carrying the food. 80% of the iron in our body is used to carry oxygen. It’s a really important thing. If we don’t have the hemoglobin moving the oxygen around our body, around our tissues, it’s not a good scene. But every good restaurant has a great chef, who is back in the kitchen activating the food, turning it into an experience. Well that’s copper. So we have waiters, who are the iron, and we have a chef, who is copper. And it turns out that in the human body, for every atom of copper, there’s 60 atoms of iron. And the hard part to get your head around is that in fact copper and iron are a ventriloquist act, and iron is the dummy. And copper is the one calling the shots. And when you begin to understand the role of bioavailable copper to activate oxygen. There’s only one mineral that carries oxygen. That’s iron. But there’s only one mineral that activates it. And that process of activation is fascinating because what the body needs to do is turn the O2 molecule into water. And it does that in the mitochondria. They’re the energy furnaces of our body. And there’s an enzyme in what’s called complex four. There are five complexes in the mitochondria. But complex four is where it’s  at. And that enzyme does two very important things. One is it takes four electrons and hands them to the O2 molecule so it can become two H2O. But at the same time, it takes four protons, four hydrogen atoms, and sends them over to complex five where the actual energy molecule is made. Inside our body, energy is spelled magnesium-ATP. The body can’t recognize it, and the body can’t activate it unless that magnesium molecule is there. And what’s amazing is there is actually a rotor in complex five, and that rotor is spinning at 9,000 revolutions per minute.

– [Morley] It is. It is an indie car. And what’s interesting, very humbling, but my younger son Tom, who got his doctorate from Stanford, in biochemistry, was studying that rotor. And they were using that rotor to the advantage of the body to get things done that no one had ever thought of. So that begins to delve into how influential these minerals are that we just kind of take them for granted. We don’t even think about it. And the way I describe it is it’s the difference between Newtonian physics, where the apple falls because of gravity, and quantum physics, which is a completely different world. I don’t know about you, but I barely understand what quantum physics is about. I just know it’s really mysterious, complicated, but it works, thank God. And the parallel is that the focus of a lot of medicine and nutrition is on Newtonian issues, big particle issues. Hormones, and enzymes, and things like that. And there isn’t enough attention, at least from my standpoint, on the power and the majesty at the quantum level about what these electrons, what these minerals are doing to move electrons. Because that’s their job, is to move electrons to make things happen. And the importance of it is that in the average human body there are about 9,000 enzymes that allow us to have a happy life. And they all work just like the car we drive. When was the last time you drove a car without a key? You think about the size of that key to the size ratio of that car, and that’s the mineral inside the body activating an enzyme to make it work.