Toxicity Post #69: Retinol-A is an absolute requirement for building blood and especially hemoglobin.

The Irony of Retinol!

This post will introduce what will become a series of posts focusing on real vitamin-A, as known as retinol, the animal-based form of that key nutrient. (Retinol-A is very different in role and function that beta-carotene)

Real vitamin-A (retinol-A) has been a part of the Root Cause Protocol (RCP) from day 1, in large part because of its known role in the synthesis of the ceruloplasmin protein that expresses as the ferroxidase enzyme. Ferroxidase is the master anti-oxidant enzyme that no one on the Internet talks about, and is akin to “Voldermort” in your Doctor’s office!

Nonetheless, we will continue to march forward and advance the knowledge and understanding of human physiology and start teaching ourselves about the profound regulatory roles of retinol-A.

As an opener, here’s a recent interview that I did this week with Ben Edwards, MD, founder of Veritas Medical Group. Get ready to be surprised, and even amazed, at what retinol-A is involved in.
podcast.app/youre-the-cure-april-e31211013/

Retinol-A is an absolute requirement for building blood and especially hemoglobin. Yeah, even I was a bit surprised to learn that!

The first recorded study to make the causal link between retinol-A and curing anemia was in 1855! No, that is not a typo! Theophilus Thompson, MD, FRS, a noted physician in London at the time proved that cod liver oil cured folks of anemia, which is a term that technically means: “low red blood counts, low hemoglobin and low hematocrit” Interesting right?

Some 120+ years later, Robert E. Hodges, MD and his colleagues completed a blockbuster study in 1978 on the impact that real vitamin A (retinol-A) deficiency had on the process of making blood (hematopoiesis). Here’s the link to the abstract for Hodges, 1978: 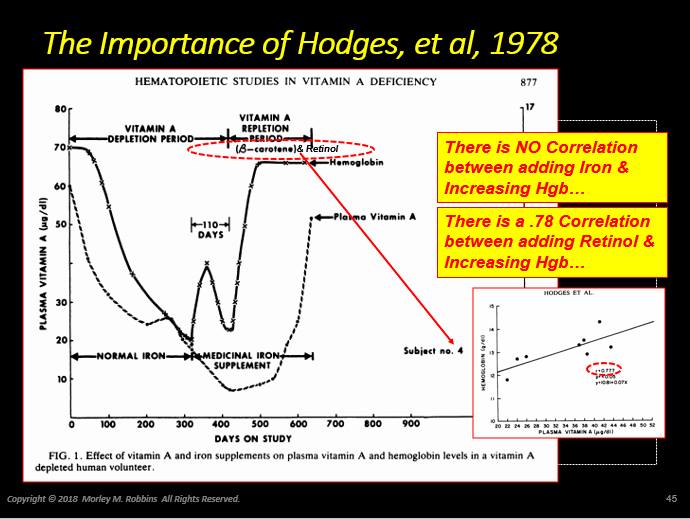 Iron, acting alone, will not correct anemia. That has been known since 1855!  When hemoglobin goes south, it is more an issue of hemoglobin metabolism not a shortage of the heavy metal, iron.

Let me clarify those two points. There is a belief in society, and clinical circles, that only iron alone can restore levels of hemoglobin. Now we all know that iron plays a key role in holding oxygen in that transport protein so that tissues can use that oxygen for respiration. This post is not challenging that obvious truth.

What this post is challenging is the mind numbing and incorrect misconception that iron is the best answer to blood tests that show iron is low, when for a fact that iron is dysfunctional!

As the Figure above clearly shows, when iron gets added, the hemoglobin does rise for a brief period, and then falls until retinol is added. Any heavy metal, yes, iron is a heavy metal, will cause RBC production to rise, but it is not sustainable, just as this study proves.

I would caution folks to not take statements out of context in this kind of post. Context is king! It is essential that you do the following:

98% of our daily iron requirements come from the iron R.E.cycling System and not our diet.  Contrary to the beliefs bantered about on the Internet. We are meant to recycle our iron, not keep eating it!

We have much to learn, and much to discuss in the coming weeks to better understand the true dynamics of copper<>retinol<>iron dynamics. Once again, the physicians and nutritionists that do not understand mineral and vitamin complexes metabolism have misled us. Undaunted, we will spread this good news, far and wide on MAG FB Group, and communities within and outside of FB.

Know that you’ve got your retinol-A bases covered if you’re doing the RCP. But what we will all need to do is unlearn and relearn how blood is really made in the human body. You will find these truths ironic and in conflict with much of your conventional training found on most sites on the Internet,

Stay tuned to be prepared to be further enlightened by this copper<>retinol<>iron dynamics.