This post is based on a tale of two irons, hepcidin peptide that regulates them and causes chaos, confusion, clinical conditions and clinical currency.

“People would rather believe a simple LIE, than the complex TRUTH…”
— Lao Tzu (~600 BC)

For all intents and purposes, this post on iron toxicity is a Modern-day Survival Guide in an era when the only clinical and robotic response to “low iron blood markers” is ignorance, apathy and more iron.

Your Doctor wanting to give you more Iron = simple lie

“May you live in ‘interesting times“

Well Dorothy, we’re not in Kansas anymore, but we are living in most interesting times.

This post will be among my last to put to bed this absurd and entirely engineered crisis about iron, copper<>iron metabolism.

These last 3 posts will be in three parts:

Part I: The facts of “low functional iron”

Iron is a Janus-faced mineral: It’s both a good guy and a bad guy.

“Iron forms the central cation of hemoglobin, other heme-containing proteins (such as myoglobin and cytochrome P450 enzymes including the mitochondrial electron transport chain), and iron-sulfur cluster-containing enzymes found in most cells [179, 180].” (Nairz, 2017, below)

“Free labile forms of iron and heme, however, are potentially toxic and threaten tissue integrity due to their pro-oxidative properties which are largely based on the capacity of iron to non-enzymatically boost reactive oxygen species (ROS) production via Fenton chemistry [89, 119].” (Nairz, 2017, below)

H.J.H. Fenton who was a British chemist at Cambridge University first discovered this toxic nature of iron in 1894.

Given all of the above, it is well worth wondering why doctors only measure ferritin (when we have no idea whether it’s the heavy or the light form), and that from 1860-1972, all clinicians and scientists’ only measured hemoglobin (Hgb) to assess true functional iron status. (Fox, 2003)

When Hgb was low, these Clinicians and Scientists knew that this condition was a clinical sign of copper deficiency.

I’m mildly curious, has your practitioner ever taught you any of these basic clinical iron facts?  When they claim, completely incorrectly, I might add that you’re “anemic!”, you take their word for it.

Chances are 99.9 out of 100 you have low ferritin because you have high iron in your tissue and that does not show up in the blood tests. This is, for a fact, being caused by an inflammatory process, not an iron deficiency.

Inflammatory chemicals called cytokines (especially IL-6), cause the uptick of hepcidin synthesis, the very iron regulatory peptide (hormone) that causes iron storage during a state of inflammation. I’m quite confident with the fact that you only know your ferritin status and that you do not know your hepcidin status, or your hemoglobin status. This is why you are so confused and yet, so iron toxic, and are likely suffering from one or more of the 30+ autoimmune conditions that are caused by excess, stored iron. Ironic isn’t it?

Okay, so let us lay out these arguments with compelling clinical literature that you can use to educate your doctor to the truth of iron, the truth of copper<>iron metabolism, as well as the dangers of iron supplementation:

1) Here is a very thoughtful and helpful overview of how the body responds to infection and what the metal dynamics are in response to that ubiquitous state:

What I found particularly important in this study by Porcheron (2014) was the following:

2) Here is a very recent and very understandable overview of Iron metabolism and the role of key proteins to manage this Janus mineral:

What is particularly important with regard to this study is the following:

“The presence of Fpn1 [Ferroportin] in the absorptive epithelium [tissue that absorbs] is under negative control of hepcidin, which is mainly secreted by hepatocytes [liver cells] in response to high circulating and tissue amounts of iron or upon stimulation by inflammatory mediators [171, 229].”

Please note, IL-6 as noted in the Porcheron, 2014 study is the granddaddy of all inflammatory mediators. The fact that your doctor has never considered, nor tested for, inflammation should send a chill down your spine. It’s worth noting that iron, acting alone, can cause a rise in IL-6.

2b) This is not new information that inflammation causes low iron levels in the blood, known formally as hypoferremia. It has been a mainstream medical fact for at least the past 30+ years.

3) Now, next to understanding the importance of the role that inflammation plays in these iron dynamics is to understand the profound role of iron recycling. I have termed “R.E.cycling,” to properly acknowledge the role of the Recticulo-Endothelial System, aka RES, which relies on macrophages [cellular pac-men] to gobble up the dying red blood cells (RBCs), and ideally, release the iron consumed in this process into making new RBCs.

I am hoping that after reading and studying, just the diagrams, in the Soares article, and you still think that ferritin-only blood test properly captures the entirety and profound complexity of copper<>iron metabolism, and that you are thinking you are not anemic. 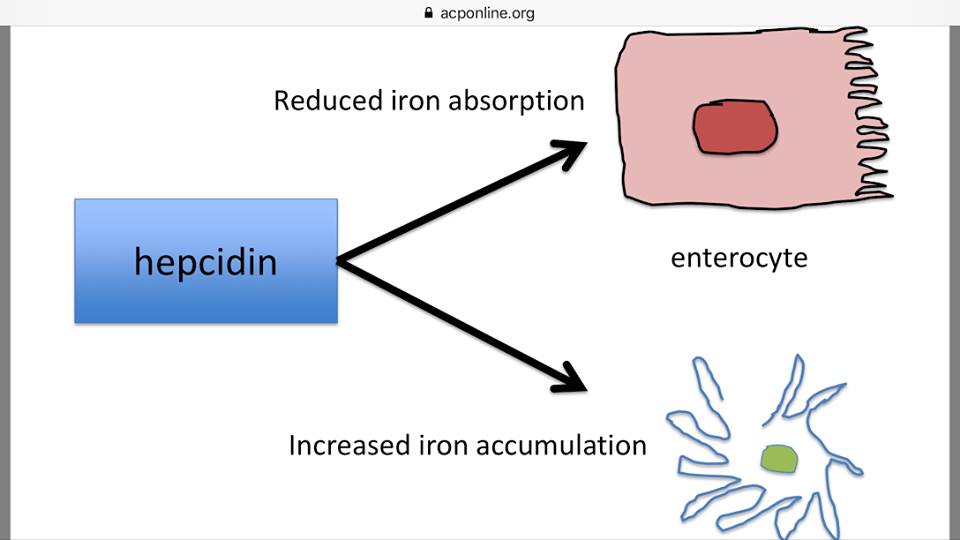 4) What we learned recently (Iron Toxicity Post #56) was that these macrophages can and do get overwhelmed with too much iron. The lack of bioavailable copper via ceruloplasmin oxidase, as known as ferroxidase, prevents the proper release of macrophage held iron. When that happens, they perform very differently and these iron-laden macrophages create immune mayhem and cause a breakdown in iron R.E.cycling:

5) What we’ve learned in several Iron Toxicity Posts is the foundational importance of having ceruloplasmin oxidase, as known as ferroxidase enzyme function, to allow proper iron egress [release] from the cells, especially the macrophages:

6) And then these iron concepts and regulatory conditions took a radical turn when we learned that iron, in and of it, activates what is called the inflammasome via stimulation of the NLRP3 protein!

This is otherwise known as the cellular danger sensor, that triggers the inflammatory cascade of cytokines, chemokines and other acute phase proteins (APPs).

This then creates the very conditions to ensure a chronic inflammatory state. Please read about this iron-induced mechanism here:

7) And finally, it is worth knowing that iron supplements, in and of themselves, cause an increase in hepcidin synthesis and release from the liver cells, as known as hepatocytes. In a way, I wish I were making up this mind-bending reality, but the fact of the matter is, the very act of iron supplementation creates iron storage. I, too, was stunned to learn this iron reality over the weekend!

There you have it folks, two solid years of research boiled down to 8 scientific articles that say:

So in my next post on Iron Toxicity, I will drill into the proper tests and testing panels that will get you out of this iron state of confusion and clinical chaos.