But to a person with wisdom, mountains are mountains and rivers are rivers.

I want to bring what I believe is an important set of articles together to drive home a key point about iron metabolism.

It turns out that red blood cell metabolism, and by inference, iron metabolism, are among the most sophisticated recycling programs on this planet. Iron in motion is a great thing. Iron is storage, however, is the basis for rust or oxidative stress as it’s called in the highbrow scientific literature.

What I came across this morning during my daily vigil with the research was this penetrating study by:

** Note: this study may be among the most important I have shared regarding this iron topic**

There are some penetrating insights provided by these two gifted iron researchers, despite the contemporary, habitual pattern of dissing ceruloplasmin (Cp) in the process of ensuring optimal iron metabolism. As expected, the spotlight is put on the ever-popular hepcidin, the recently anointed iron hormone that has whopping 25 amino acids.

Please note: Cp has 1,056 amino acids, 8 copper atoms and is a metabolic powerhouse in our bodies as I have stated previously.

In my opinion, the study by Baker and Ghio is a bit of revisionist history about who is the key to making iron mobile. I truly believe that this is where the train comes off the tracks and creates the pervasive confusion surrounding this metal in the human body.

Remember that Cp’s gift is iron mobilization. Cp ensures that Iron gets properly attached to transferrin so that it can, in fact, be transported properly and effectively to the cells and the tissues seeking this metal for our metabolism. That is the key.

This seminal study by Osaki and Johnson is one of the most cited studies in the early research on iron and ceruloplasmin. Regrettably, that is no longer the case.

Now to get a handle on the scope and reach of bioavailable copper, made possible by Cp, please read this compelling chapter by Gary W. Evans, PhD from 1977:

While it is ancient history, but isn’t the wisdom found with our elders?

Please pay particular attention to the key enzymes noted on Pg. 169. It is a veritable Who’s Who of critical metabolic chemicals that will not work without bioavailable copper, and when that’s the case, these enzyme dysfunctions lead to scores, and scores of symptoms, that then get labelled & treated, but seem never cured. So what’s my point? 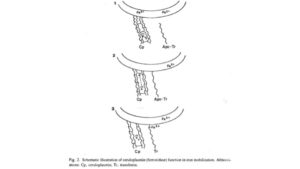 Please study figure 2 (Pg 172 of Evans Chapter) to fully understand how Cp enables proper loading of iron onto transferrin, which is what ensures the mobilization of iron.

The objective of iron metabolism is mobilization and Cp is the metabolic agent to guarantee that functional requirement is met.

The object is not to store iron. That is outrageously out of touch with the wisdom of the body. For those seeking to gain a broader and more contemporary understanding of these dynamics between iron, hepcidin and Cp, here are a few studies that you will no doubt find enlightening:

I do apologize for the length and the # of articles being cited. This dynamic of iron metabolism is not grade school math! Simple ferritin only blood tests are pedestrian, limiting and misleading.

Regrettably, iron metabolism is graduate school rocket science! There is nothing that is simple, or straightforward about this central aspect of our bodies. I have been laboring tirelessly for 9 months now and am only beginning to understand the players, the components and how all this fits together and how the lack of understanding this has led to so much metabolic dysfunction from the mineral dysregulation.

I do hope this offers up some keen insights about where to focus. I sincerely believe that Cp is, in fact, a mountain and I see it as one, unlike the current fraternity of iron researchers and practitioners seeking the support of their funders.

Here’s to our continued wisdom re this ironic dynamic!