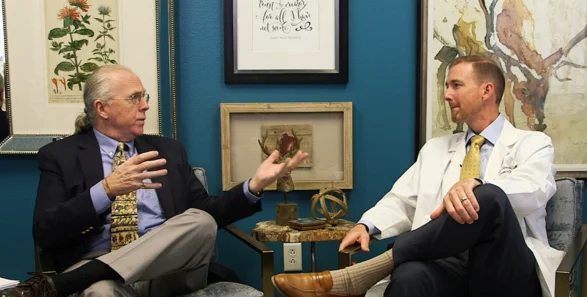 FAQ: Is there any info I can share with my doctor?

Dear Doctor: If you’re here because a patient of yours sent you this link, thanks for not just instantly discarding it because “oh great, another patient sent me another link to some videos on the internet.”

Look, I know… Med school was tough as nails. So I know something inside of you is probably skeptical: “Could it really be this simple???”

Struggling against my own skepticism, once I began to implement the steps of The Root Cause Protocol with my patients (regardless of their symptoms), I started to see that yes, this helps cells create more energy, and clear “exhaust.” And once that starts happening, everything else in the body just starts working better.

Of course, there are a few caveats and “if-then’s” you’ll need to be aware of. And Morley and I discuss many of these in the rest of these videos. So I strongly encourage you to invest your very precious time (and a few dollars) to watch The Root Cause Protocol 101 video series.

So there’s this inflammatory process that’s happening more and more and more at younger and younger ages. And what we’ve been trained to do is give some drugs to try to tamp down that inflammatory cascade. I think what we weren’t trained enough in is looking deeper at a root cause. And I am gonna tell you that nutrition’s a big part of this.

And I can think back to UT Houston, I got about one to two hours of nutrition in four years of medical school. And I remember an elective nutrition course, not part of the main curriculum, it was an elective. And it was at lunchtime. And so twenty of us showed up because they had free pizza. And there was a cardiologist putting slides up on the board about reversal of coronary artery disease, reversal of ischemia. He had these profusion scans, pre and post. And his treatment wasn’t statins and beta blockers, it was nutrition. It fascinated me. And I asked him, why are we hearing this at a lunchtime elective lecture and nobody’s here? Why aren’t you part of the main curriculum? And his point of view on it was, well, there’s a lot of money to be had in bypass surgeries and stints, and there’s not a lot of money to be had in teaching someone how to eat.

So I had a patient that I was seeing who came to me, and we were able to help her some manage her diseases, her chronic diseases. But she followed up a few months later to tell me she had found something online. I’m sure your patients come in all the time, I read this online, and you blow it off. Nah, that’s the web, you can’t believe anything on the web. But she had done this protocol that she had found online, and this woman was a new woman. Her energy, her depression, her chronic fatigue syndrome, all these kind of vague symptoms that we don’t like to deal with as doctors because we don’t have a good answer for them. That was her, and she was dramatically different. She was well. It intrigued me because, again, I went to medical school to help people. I wasn’t able to help her. And now she’s sitting in front of me saying she did this protocol from on the internet and she’s better. But I’m all ears when it comes to anything– because I’ve come to the realization, we’ve plateaued in our ability to manage chronic disease and get results.

There’s got to be something more to it than the pharmaceutical. I know that diet has an impact. I know lifestyle and stress and all that.

So when she showed me the protocol, I did go online and read it and look at it. And what I found most interesting was Morley Robbins, who’s not a doctor but has spent the past 10 years ping into the peer-reviewed medical journals, the research. That’s what impressed me the most. This guy’s saying a bunch of stuff about the root cause of inflammation. So I mean I was right on that. I was interested. But then he backs it all up with thousands of articles that he’s poured through.

So Morley and I have talked in a lengthy video, three- to four-hour long video unless we can edit that down. But that’s what I really invite you to spend some time– it doesn’t qualify as CME officially– but I would highly encourage you to watch the video as part of your continuing education. Because I know your hearts are for your patients. I know you went to medical school to help people.

Unfortunately, there’s, I think, a bias. I think there’s a certain amount of education we get in medical school, but there’s a broader way to look at the human body and look at disease management, even reversal of disease, when we start ping deeper into the root cause.

I think type 2 diabetes is a great example. We’re chasing blood sugars all day long, metformin and insulin shots and all this stuff. But the actual cause is insulin resistance. We know this, but we just treat the blood sugar. That’s kind of like treating a fever when you have a gangrenous wound on the leg, and you’re just gonna treat the fever with Tylenol. That’s good, I got my 100 degree fever down to 98.6. Great. I mean, we all understand you’re not gonna treat gangrene with Tylenol. The root cause of the fever is the infection. Deal with that. The root cause of the high blood sugar is insulin resistance. Deal with that. It turns out there’s just not a medication that really deals with insulin resistance. The medications only deal with blood sugar.

So although it’s different, it’s different from what you’re hearing in your circles I’m sure, I would invite you to listen with an open mind. I think we can all agree what we’re doing now is not working. We’re a sick country. The disease burden’s skyrocketing. So please open your mind to a deeper level of understanding of chronic disease. And would really invite you to watch our more lengthy video for the details where Morley and I really pe deep into the literature and sort of connect the dots for you. So, Morley, would you have anything to add to that to encourage these physicians to watch the long video?

– [Morley Robbins] I spend two to three hours every morning seven days a week, and have for the last almost 10 years, reading peer-reviewed literature from JAMA, New England Journal of Medicine, Lancet, American Journal of Physiology, the real top-drawer. But I’m not restricted to that. I will look for any kind of peer-reviewed literature that really delves into mineral metabolism. And, as we’ll be discussing, I’m focusing on three key minerals, magnesium, copper, and iron and really understanding the dynamics between those three. And what I think this video offers, as you’ve alluded to, is it’s continuing medical education, but it’s also continuing mineral education. Because the root dynamic for the inflammation that you so aptly focused on is missing minerals. And when those minerals are missing, enzymes don’t work right and then symptoms begin to appear. And so I think the key is helping provide this information because what does get measured does get managed. And there are very specific ways to measure minerals and understand their impact in a healthy body and a not-so-healthy body. And I really think that that’s an important dimension of the healing process is to understand those dynamics.

– And I know a physician’s temptation right now is potentially gonna be tune you out because you just said all this is basically three minerals. Can it be that simple? And that’s why I really invite you to watch the full video because, again, the medical research from around the world from 1910 to current synthesized all together, it’s hard to deny what the research is pointing to.

– Absolutely. There’s a very consistent theme once you really allow yourself to accept the message.

– Again, I invite you to watch our full-length video. We think it’ll be a very educational eye-opening, and most importantly, will help your patients, I believe, deal with these chronic disease of inflammation.