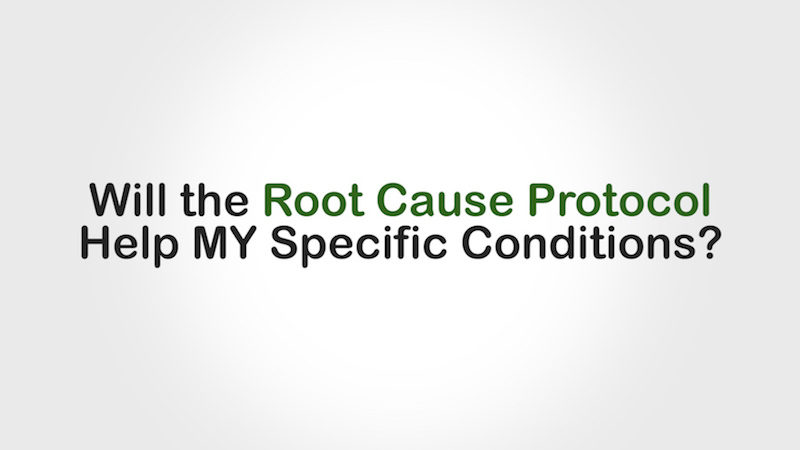 FAQ: Will the RCP help my specific conditions?

"Will this help me?"

“The RCP sounds great and all, but can it actually help with my specific health challenges?”

Morley Robbins and Dr. Ben Edwards addressed that specifically in the following video, offered as a free preview of the RCP 101 Video Series.

– [Dr. Ben] So we’ve just gone through a number of testimonials, different disease diagnoses and stuff, and what about that person out there that says well, you didn’t mention my disease, so I’m unique, I’m different, this probably won’t work for me, because you didn’t talk about my disease.

– [Morley] Yeah, it’s a great affliction on the planet. We’ve been trained to believe that we’re snowflakes, that we’re each unique, and I began to look at snowflakes and actually realize well they’re all made of ice, right? They have different designs, they’re beautiful, they all look different, but they’re all still ice. The most obvious place where we’re all different is your fingerprints are different than my fingerprints.

– [Morley] Right? Anyone you know has different, all of your children have different fingerprints, right, but they’re all made from the same tissue called collagen. But for some reason it expresses differently from person to person. That’s one of I think one of the great mysteries in life is why does this consistent tissue express differently and, but yet it’s the same tissue, it’s all collagen. And so what I advise clients is yes, you have notable symptoms that you think, in your situation you think is Ben Edward Syndrome but actually it’s the expression of the mineral dynamics responding to the stress that’s inherently the same. That this fundamental axle of copper iron dysregulation, it just expresses differently from one person to the next. What I don’t know is why does one person get MS, another person get heart disease, another person get colitis, another person get rheumatoid arthritis or whatever, and there’s compelling evidence about the energetics of our being. The work of Louise Hay or Bruce Lipton or some of the other luminaries that talk about the bioenergetics

– [Dr. Ben] Getting into quantum medicine

– [Morley] And where we carry that energy. One of the most important aspects of iron first of all, it’s really important to understand that the only way you can get rid of it is to bleed it out for the most part. That’s the most effective way, anyway. But one of the most powerful properties of iron is that it is attracted to damaged tissue. The body is not demonic. The body is recruiting red blood cells which have hemoglobin, which have oxygen because the tissue that’s damaged is trying to repair itself.

– [Dr. Ben] Yeah, the delivery guys are bringing all the raw materials to the work site but you gotta have all the workers to assemble it.

– [Morley] Exactly, you gotta have the carpenters.

– [Morley] That’s the copper, and so the tissue is taking that oxygen, passing electrons to it, to go through that complex four in the mitochondria and allowing that precursor energy molecule, ADP, to go over to complex five so it can become magnesium hyphen ATP.

– [Dr. Ben] The energy molecule that allows a cell to do what it needs to do.

– [Morley] Exactly, and if there’s too much iron in the mitochondria, no can do.

– [Morley] It gums the works, it doesn’t work. So let me give you an example of why this is so important because I think people sometimes, they need that visual. The complex four, real important.

– [Morley] In the mitochondria.

– [Dr. Ben] The carburetor of the cell, it creates your energy.

– [Morley] Absolutely, and there are electrons that are passing through that complex, and what that copper-driven complex does is pass four electrons to oxygen, so that you can make two molecules of water. That’s a really important part of the process. And when that water gets made, there are three molecules of ADP that get produced, that get released, and they go over to complex five. What’s happening at complex five is the ADP gets matched up with magnesium ions. So this little green pearl here, we’ll pretend that’s a magnesium ion. And when it’s, this is essentially ATP.

– [Morley] Energy molecule, but when it holds magnesium, it has a different structure, right? These are the three phosphate groups, right, now technically if you wanna get really geek about it, the magnesium is held here. In the molecule, but it’s easier to hold here, but the point is when there’s a magnesium ion in this structure of ATP, the body can see it, and the body can use it. ‘Cause if it’s not holding magnesium, this phosphate can’t get cleaved off. This phosphate can’t get cleaved off later. And so the body uses those phosphate groups ’cause that is the spark that creates the energy, right?

– [Morley] Body can’t see this ATP molecule. Body loves this molecule. Recognizes it, sees it, and what is amazing is that this structure is not talked about in physiology textbooks. I’ll give you an example. My younger son Tom, very gifted runner, he can only do a 4:02.

– [Morley] At least, right? Be one of the 267 people who’ve done that. But he’s also really smart, so he obviously takes after his mom, right?

– [Morley] Exactly. So he ends up at Dartmouth, and then he decides to get his doctorate in biochemistry at Stanford. Lightweight, you know, anybody can do that, right?

– [Morley] Walk in the park, so a couple years ago for Christmas, he gave me his favorite physiology textbook from Dartmouth, Human Enzyme Physiology.

– [Morley] I thought I’d died and gone to heaven. The textbook, you know,

– [Morley] Pretty stout, it would break this coffee table, it was 2200 pages. We’re talking robust information about human enzyme physiology.

– [Dr. Ben] A little light reading at night before bed.

– [Morley] Absolutely, so I do the, I always do an acid test for these books. Go to the index and look up one word, can you guess what it is?

– [Morley] Ding ding ding. So I looked up magnesium and there were three references, one actually said magnesium, and two said MG plus plus. 2200 pages, human enzyme physiology, and that’s the cleansing of mineral metabolism that’s being taught to gifted chemists, physiologists, nurses, doctors, research scientists. They do not understand that without this mineral key, this ATP doesn’t work, and the 9,000 other enzymes like it.

– [Dr. Ben] So it’s not a big leap to see why we got off track or why no one’s putting these pieces together if we’re not even educating from the get-go.